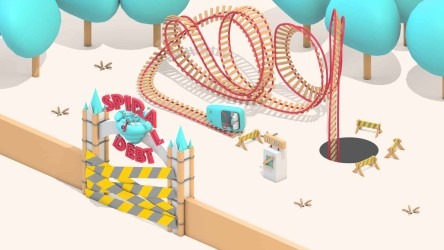 Understanding the spiral of debt

The spiral of debt is something we talk about quite a lot at Creditspring. It might sound like the name of a financially crippling rollercoaster that you might find at the world’s worst theme park, but it’s a lot scarier than that.

What is the spiral of debt?

The spiral of debt and its impact on people's financial wellbeing is something we talk about quite a lot at Creditspring. It might sound like the name of a financially crippling rollercoaster that you might find at the world’s worst theme park, but it’s a lot scarier than that. In this blog post, we’re going to explain what we mean about the spiral of debt. We’ll take a look at how so many people fall into it every year, and we’ll show a couple of ways you can steer clear of it.

The spiral of debt explained

The spiral of debt, sometimes called a ‘debt spiral’, is when you’re forced to borrow to cover your existing debts, sometimes again and again. You borrow a small amount you think you can pay back easily, and for some reason you find yourself unable to pay. You borrow more money to cover your first loan, but you now owe more money to the second person you borrowed from. You find yourself needing more money, more urgently, and not only does the amount you need to borrow increase, the cost of that credit usually increases too. There are dozens of ways you can fall victim to it. Borrowing more than you can afford, not making repayments quickly enough, taking out expensive forms of credit, a sudden decrease in your income, an unexpected increase in your outgoings, an unexpected expense… are all ways that the spiral of debt can suck you in.

Why is it so difficult to get out of?

The scariest part about the spiral of debt is that most people don’t see it coming, and only realise when it’s too late. 40% of people in the UK have less than £100 in savings, meaning that nearly half of us need to borrow to cover an expense that size. By the time you’re in the spiral of debt and you find yourself needing to borrow more and more just to cover your living costs, the odds are stacked against you. Once you’re in, it’s almost impossible to get out.

The cost of credit

Take the cost of credit, for example. Lenders typically let people with better credit scores borrow more cheaply, as they’re seen as more likely to make all of their repayments on time. How much, and how often, you borrow money can impact your credit score. If you find yourself needing to borrow again shortly after you first borrowed, lenders will see you as slightly more risky and the cost of your credit will increase (normally with a higher interest rate).

The impact on your credit score

So, at this point, you owe even more money, and you find yourself with a lower credit score and more expensive repayments… all thanks to the spiral of debt. While you might have been struggling to manage your debt earlier, now it’s even harder to manage. It can be tempting to borrow more and more, just to buy yourself time, but all that happens is you dig yourself deeper and deeper into debt.

How can you steer clear of the spiral of debt?

The best thing you can do to steer clear of the spiral of debt is to understand how it catches people out. Virtually all of us will need to borrow money at some time in our lives, so you shouldn’t be scared of borrowing. You just need to be aware of the risks and be careful.

Savings are great protection. If you’ve got a little bit of money tucked away for emergencies, especially unexpected expenses, it means you need to borrow less. The less you owe, the less you have to repay, meaning you’re at less risk of being sucked into the spiral.

The cost of your credit

Pay attention to the cost of your credit. Payday loans, bank overdrafts and credit cards might be a quick fix, but they can be really expensive in the long run. Even if you don’t have the best credit score, it pays to shop around. Spending half an hour googling for the best rate, or finding out what Money Saving Expert or Which? recommends could make all of the difference.

Borrowing shouldn’t be scary and doesn't need to be ridiculously expensive. If you need to borrow for an emergency, then you’ve got enough going on! You shouldn’t have to worry about where you’re going to get the money, or do mental gymnastics to work out how much it’s going to cost. We’ve created a brand new way to borrow. A way to borrow that rewards people for thinking ahead with their finances, and protects them from the spiral of debt. It’s credit, but not as you know it. Interested? To find out more or check if you are eligible for a Creditspring membership just click here